The Progeny 280W portable power station is a small portable solar generator that you wouldn’t ordinarily take serious – if you have no idea what the unit is or what it is capable of.

Afterall, we are in an age and time where bigger and popular are adjudged better.

In that regard, the Progeny is determined to disappoint: the unit is quite small, plus it is light (at only 5.51 lbs – about 2.49 kg).

In a similar vein, the unit is also not well known neither does it make any claim to being popular. As a matter of fact, great chances are that, you’re only getting to meet or hear about the unit today (or the past weeks or months).

It is thus a unit that common sense would detect that you don’t immediately consider.

But, should you? Should you refrain from considering the Progeny 280W portable solar generator because  it is small, makes only about 280W of power and has no reputation to back itself up?

This is the all important question I’ll be answering via this review today.

At the end of it, you’ll certainly have an answer that is as impartial as it is inspired by deep knowledge and an intricate understanding of all things solar generators.

On first look, the Progeny 280W lithium portable power station looks like a smart UPS – the variant that was used when laptops were still not very common and computer users needed to make certain that their units held up long enough for them to save up on what they were working on and either shut down or switch power sources.

Though mean and muscular looking, this is the very first impression the unit gives out, especially from a respectable distance.

This impression is upheld on coming closer and seeing the inscription lettered on the body of the unit. The AC port reinforces this first opinion and finally, the lettering: “Portable Power Station” closes the deal.

For the uninitiated (read: non-tech savvy) thus, this is an Uninterrupted Power Supply (UPS) for a computer and nothing more, especially when its small and super portable size is factored. 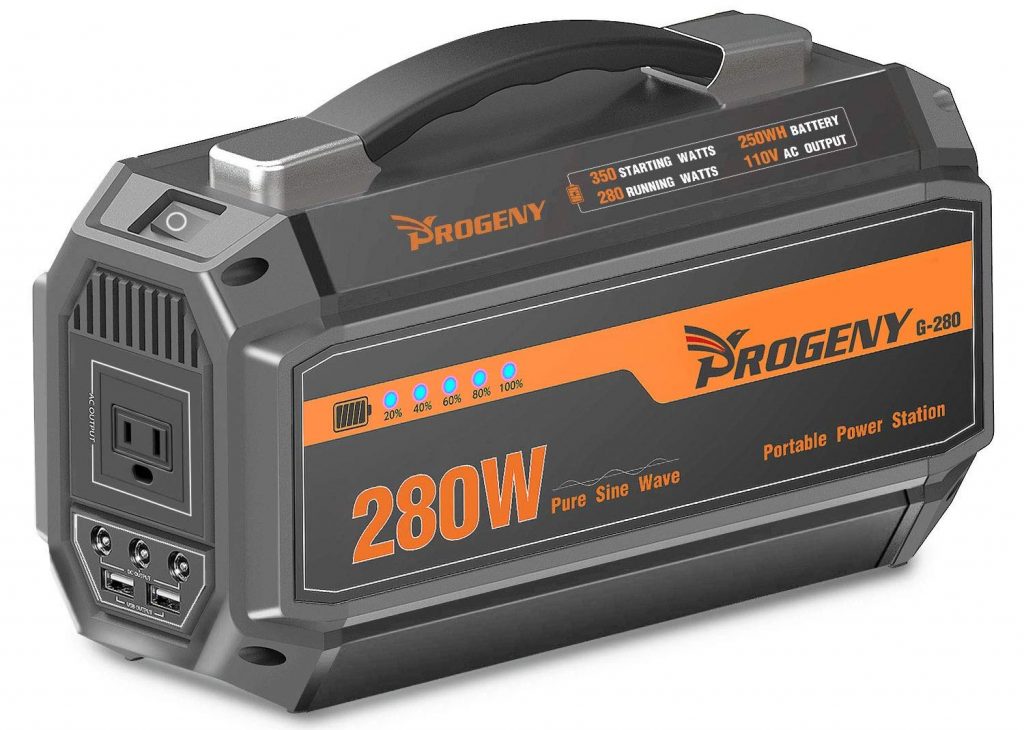 However, after figuring that the unit is a portable solar generator, the next challenge results in wonder: at its very tiny and completely unassuming size, what can the Progeny 280 Watts portable solar power unit charge?

What Can The Progeny 280 Watts Lithium Portable Solar Generator Power?

Powered by a lithium ion battery, the actual capacity of this ultra portable solar power station is way more than it expressly shows on the very first look.

The reality of underrating the unit’s power, I’m certain, stems from the long use of lead acid and the false notion that bigger is better, especially in all things battery powered.

To get the comparative figures of the super portable solar power station in context, I had to let it run some power devices to be able to get to the roots of its power.

It is important to say that, the results shocked me – beyond words.

Here’s what I discovered:

These were the things that I actually had cause to test the unit with. However, it is to be noted that anything rated under 300 Watts can actually be charged or powered by this little portable solar generator.

However, keep in mind that actual run power will largely depend on the power the connected unit or appliance actually draws from the generator and importantly, how long you let such an appliance run when connected to the portable solar generator.

Before a portable power station can be reliably judged by way of review, its features and specifications must be well known and understood before such a unit can be properly appreciated.

Usually, the specifications are largely for the those who are either tech inclined or have prior knowledge of the renewable energy field and can understand both the jargon and near jargon of the industry.

The features, on the other hand, cater for the average everyday user who does not care much about the specs or isn’t versed in the reality of renewable energy (of the portable variant).

The Progeny 280W solar power station is no exception.

The weight of a solar generator is one of its biggest feature which can singularly make or mar anyone’s experience using it especially if the unit is intended to be used as a portable manner.

For the 280W Progeny, this is exactly what it was created for: portable use in places where size and performance are of the essence.

To test this, I held the unit in my right hand and attempted to run off with it; after ascending and descending a flight of stairs – simulating harsh uneven terrains as is usually common in the wild.

This task was surprisingly easy to achieve and given the fact that the unit weighs only 5.9 lbs, I figured I can take the unit to the world’s extremes and hold unto it for many hours.

This, I believe, will also ultimately be possible for any fit kid, teen or adult – whether he/she is a young adult or in the spectrum of the elderly and senior.

Weight-wise thus, I score this portable solar generator unit a straight 10 out of 10.

Noisewise, I found out that the unit, powered by a pure sine wave inverter, is super quiet and completely silent during normal working conditions and circumstances, even when placed close to a user.

However, in the dead of night, when all things hold still and a pin drop could be heard, the portable solar generator could barely be heard working, when I kept it close to either my bed or the table I was working on.

This sound, it is instructive to note, is so light that it could have been completely missed – if I wasn’t specifically looking for it for the purpose of this review.

It is safe to conclude that whatever the sound this unit makes, the worst of it is barely audible on a really quiet night and completely incapable of obstructing your sleep or diverting your concentration when work calls.

Runtime wise, all thanks to a relatively small battery and an equally relatively small inverter, this portable solar generator is not capable of handling a plethora of load like its bigger cousins.

The very best this solar power station can do is a CPAP machine for about 3 nights or a traditional laptop for about 3 charges plus.

While this is the very best the unit can go, when its weight to power ratio is factored, vis a vis its price (and portability), the generator is clearly an awesome deal; an option that for its intended use, works both brilliantly and smartly.

In this regard too, I gladly give the Progeny 280W portable solar generator a pass mark. 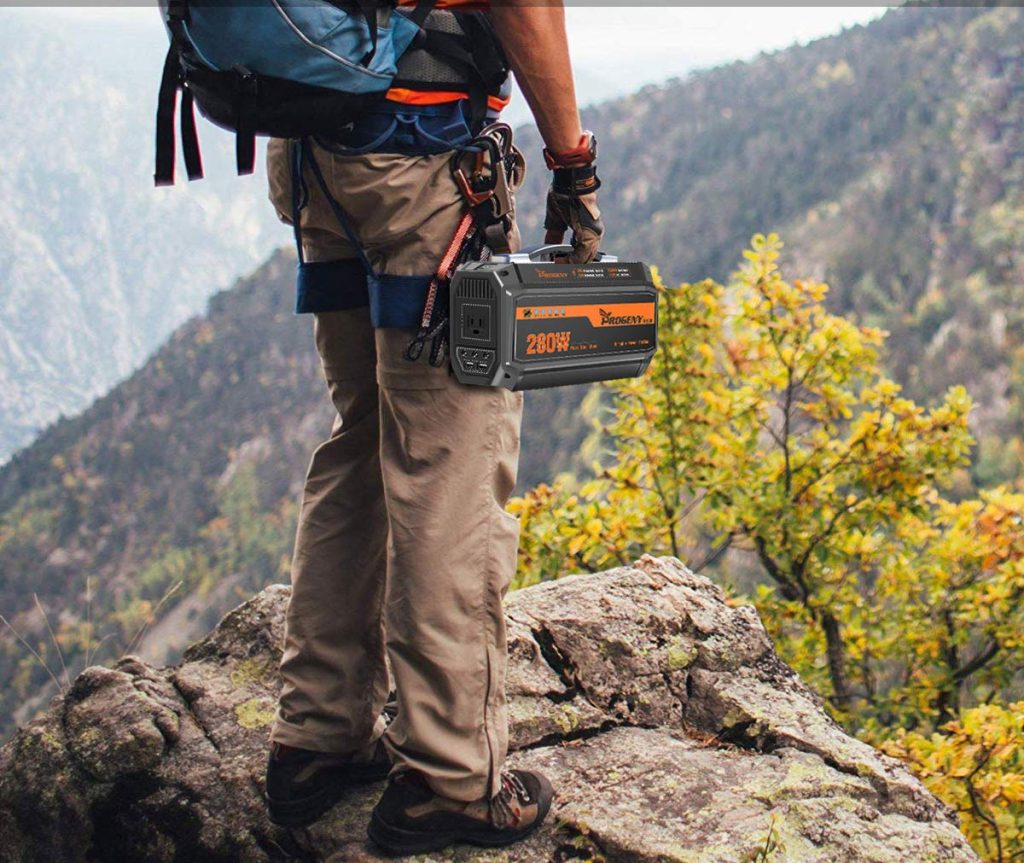 When many people think of a portable power station, they imagine a large, heavy duty unit that can power their homes and backup all their power hungry appliances in case of a power apocalypse.

While there are indeed such units – and they cost a lot of money – the 280W option form Progeny is clearly not one of them.

Accordingly thus, if you are looking at such an option and believe that this Progeny will serve you in an awesome manner, you are mistaken. For such power, I’ll advise that you take a look at the Yeti 3000 lithium. Or a second look, if you already have.

For the solar generator at hand, it is smart to understand that you can only power very light electronics like a laptop and CPAP machine.

It is also worth understanding that this unit was designed as a ‘handy’ option and carries the word ‘ergonomic’ to the next level.

No more, no less.

In this age and time, it only makes practical sense that a portable solar generator should be powered by more than one charging option.

Called a hybrid, this reality ensures that, no matter the conditions one meets, power remains a constant.

For the solar recharge option (which is completely free by means of the sun and also doubles as my favorite charging option), either a 60W or 100W solar panel (like this option here) is required.

For this purpose, you’re at liberty to choose any aftermarket option that falls within the stated capacity and actually suites your budget since the solar generator does not come standard with a solar panel.

With the solar option thus, charge time ranges between 6 and 10 hours (from a zero battery to a full 100%) depending on the capacity of the panels used and the sun intensity at the time.

This is, I must say, an impressive time range, given what other similar units sport and importantly, the power that the generators offers after a charge.

Using this method, the portable solar power station recharges itself from a wall socket in about 5 hours – from a flat state, which is quite a reasonable time frame for a generator its size.

However, where the charging process and time impresses me most is the realm of DC – an area I hate with passion.

I hate the traditional DC charging of portable solar power stations because it ordinarily takes forever…more than a full day to get any meaningful charge.

Now, that is time enough to get to any destination (by car). If on the other hand, you are attempting charging your unit while the car is parked, it is equally time enough to drain your car’s battery, completely (with a big enough unit) or to weaken it to a position where it won’t be able to profitably crank again.

However, the design of the 280W Progeny is smart: if requires only 5 hours from the 12V DC of a typical passenger car to ensure a full charge.

To say that I’m impressed is an understatement! I actively look forward to charging my own unit more and more this way especially during long road trips.

Light weight reality today is a much sought after feature in any portable power station.

The reason is simple and straight to the point: the plethora of users who shop for these generator type are interested, largely, in either using the units on the go or during emergency situations – both options seriously requiring a good unit not only to be portable but also extremely light weight.

In my various tests spanning years with this generator type, I have come across very few options that beat the Progeny 280W portable solar power station in general or relatively, when its power to weight ratio is factored.

This is, certainly a reality you need to remember as you carefully consider this solar powered generator.

Everything in life is primarily dual: good and bad; has awesome sides and not so awesome sides; is funny and not so funny – depending on the use you intend for it and quite possibly, your own reality.

The Progeny 280W portable solar power station is no exception. 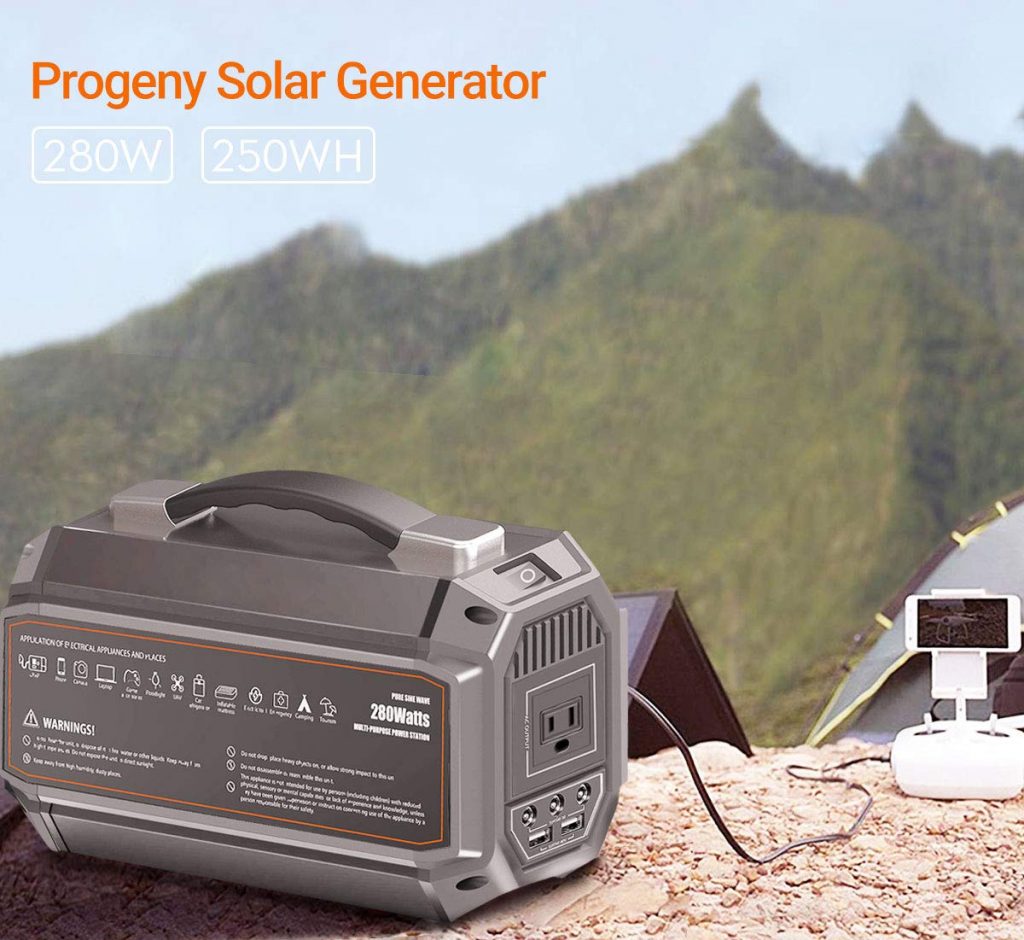 There is nothing on earth (or in the solar world for that matter) that is perfect; this unit is thus no exception.

However, for the price, weight and function this portable solar station presents itself, there are hardly better options within the range.

If the absence of an SOS function, a flashlight and the reality that you need to buy the solar panel separately does not cause serious headache for you, you should head to Amazon right away, read the reviews of other users and take the Progeny 280W portable solar power station either home to the wild – wherever the need actually arises 🙂