You are here: Home / Portable Solar Generators / Goal Zero Yeti 1000 Lithium Vs Yeti 1250: Which Is Better?

Today I’m going to do some serious comparison between the Goal Zero Yeti 1000 vs Yeti 1250. What I’m going to be looking out for primarily is which option remains better in this day and time.

The reason for this Yeti 1250 vs Yeti 1000 lithium faceoff is simple and straight to the point: with the introduction of the 1000 lithium (with similar power and around the same price point as the old 1250 powered by lead acid), there has been some confusion as to which of these solar powered solar generators is a better offer and importantly, which would be a smarter fit in different scenarios.

As it is customary with me, I intend to put to rest that debate today once and for all. Once and for all too, I want to provide a solid answer (based on objectivity) to my teeming readers who have more than once asked me a similar question.

However, before the faceoff or comparison proper, a little introductions are in order.

Brief Overview Of The Yeti 1250

The Goal Zero Yeti 1250 is a huge solar power station that for many years, was the top of the line product and the most impressive (size and power wise) Goal Zero offered.

As top of the line product then, it was the option one was usually refereed to if massive portable power was needed or was the grand desire.

Naturally (as was common with other units of its age and time), it was powered by a lead acid battery that ensured the unit supported everything from a cellphone, refrigerator, power drills and everything else in between. 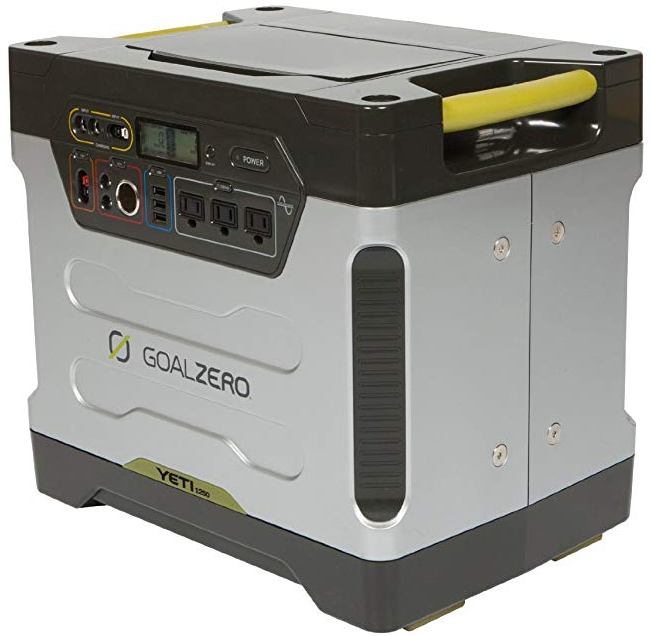 Curiously, when the Yeti 1250 held sway from the stables of Goal Zero, it was also the world’s most powerful and important portable solar generator – an option that you could not simply dispense of, if you wanted serious portable power and the sun needed to be involved at some point.

However, Goal Zero, after some years of power and research, succeeded in brilliantly outding itself and brought up several other power options which placed the Yeti 1250 at medium power at best.

Brief Overview Of The Yeti 1000 Lithium

Unlike the 1250, the Yeti 1000 lithium wasn’t top of the line when it was first manufactured or at anytime at all for that matter.

It wasn’t at any time the most powerful unit in the arsenal of Goal Zero, an option you could get referred to when interested in massive power.

Interestingly too, it was nothing special or spectacular in the world of portable solar generators when it was launched and certainly, did not get both the media attention and fanfare that heralded the Yeti 1250 and continued with it through its bright, strong days. 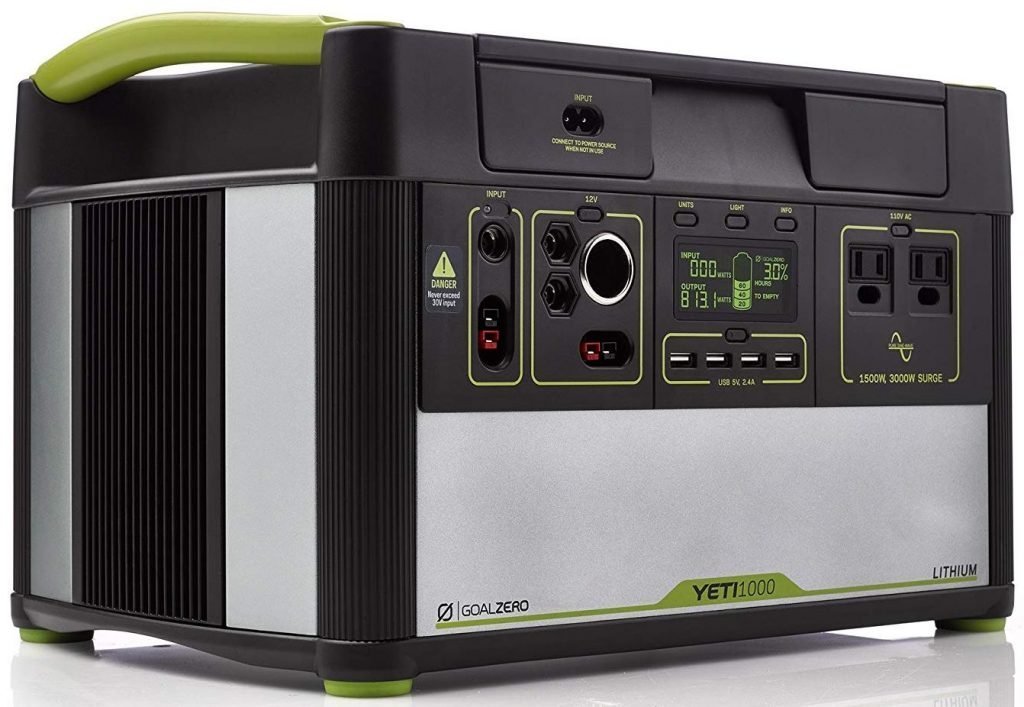 The manufacture of the 1000 lithium Yeti was carried out to satisfy the needs of those who wanted something portable with a light weight reality and some serious power punch at the same time, something the fading 1250 lacked.

However, that was not all: the Yeti 1000 lithium also filled a niche that was upcoming and threatened to become the status quo – the reality of portable solar generators powered by lithium ion as against lead acid batteries.

As a leader in the business of portable solar power, Goal Zero thought it smart to introduce a comprehensive line of lithium ion options to systematically replace its already existing product line and in addition, compete with the new reality lithium ion battery has ensured on the world.

To ascertain between the Yeti 1000 lithium and the big, humongous Yeti 1250, I’ll compare the two generators across different metrics such as charging methods, weight, shelve life etc and ultimately, pick up the aggregate winner from these categories.

It is worth understanding that the aggregate winner, ultimately, turns to be the overall winner of the faceoff between these two well known and relatively powerful solar generators from Goal Zero.

I have constantly held that the beauty of a solar generator ultimately lies in the variety of its charging options.

This is because, the more options a unit has, the more it opens itself up to be used and enjoyed even when options are slim to non-existent.

When compared, the 1250 and 1000 lithium are all rechargeable by means of:

Essentially thus, the two solar powered generators from Yeti both have the same versatility when it comes to their recharge ability and importantly, the means of doing so.

The capability of a solar generator lies largely with its battery size and the type of technology that powers its battery.

This is how it plays out: hitherto, the attraction and power of a battery was its weight as more weight ultimately meant more power.

That was the age of lead acid – an age which has effectively come to pass.

Today, rather than focus on the weight of a battery, emphasis is instead placed on the type of technology that powers such a battery with the lithium ion battery type being largely preferred.

The large Yeti 1250 runs on lead acid while the smaller 1000 lithium is powered instead by the newer more powerful and preferred lithium ion battery type.

It is also worthy of note to understand that the current trend today has shifted from lead acid batteries completely to lithium ion models for reasons that are not far from longer shelve life, lighter weight to power ratio, ability to perform during truly poor weather and importantly, general longevity.

The modern world affords its inhabitants many awesome things: one of such things is the reality of boating, RVing, camping, hiking and generally, the great outdoors.

Sometimes, these outdoors takes its lovers to places very far away from civilization where even the grid does not serve.

In such instances, the need for a portable power source becomes strong and truly real.

In such instances, power sources that fit this bill are options that can be easily carried by one person from one place to another without soliciting for the assistance of another person or using such assistance like a roll cart.

In this regard, the larger Yeti 1250 fails woefully: it weighs an intimidating 103 lbs (46.7 kg) – a weight that only one person, no matter how healthy or strong will have challenges tackling.

On the other hand, the similarly powerful but less weighty Yeti 1000 lithium weighs a decent 40 lbs (18.1 kg) – a weight range that is easily liftable and carryable.

However, the smart LCD and an extra USB port places the Yeti 1000 above the older Yeti 1250 – that is, if features such as the mentioned are important to you.

If they are not, you will find out that, basically, the two options are the same.

The shelve life of a solar generator refers to the duration a generator can hold a charge after been fully charged and put away from use.

Here, the longer the shelve life, the more certain one is of power when the unit is picked up and power actually demanded from it.

The older Yeti 1250, thanks to its outdated lead acid battery, offers a shelve life that is not more than a few months (three months at best).

On the other hand, the lithium powered Yeti 1000 can last well up to a year – and beyond on the shelves, all thanks to its newer battery type.

The implication of this is simple and quite straightforward: even if you forget to charge the unit for months on end, you are always assured of power if you ever need it, when you precisely need it 🙂 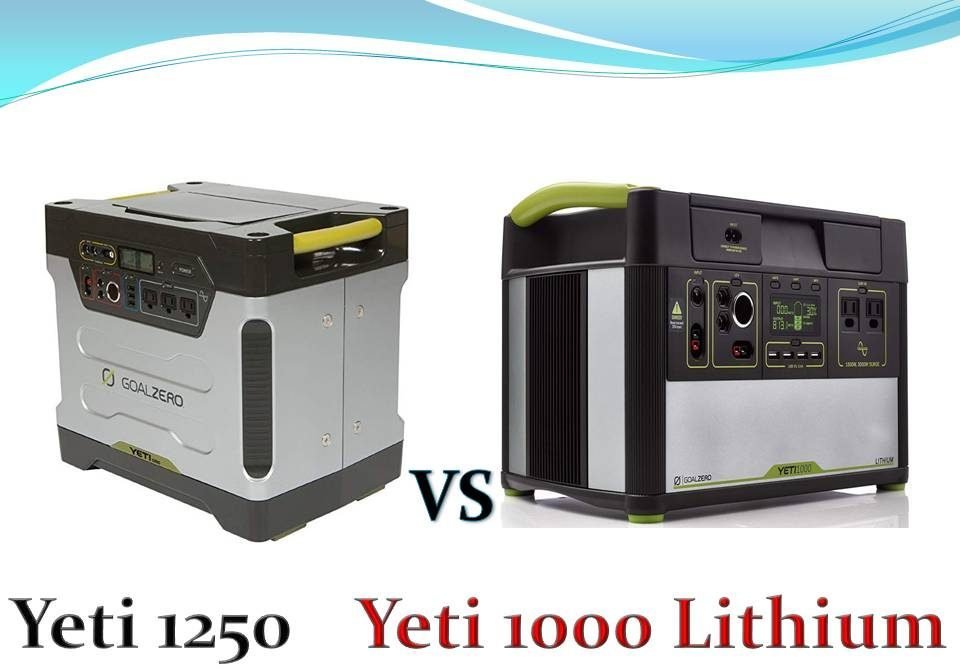 In this faceoff article detailing the reality of the Yeti 1000 lithium vs Yeti 1250, I’ve adopted the following metrics on which I have based my comparison:

In my professional experience, these are the most important metrics that either make or mar any solar generator.

In this comparison, there was just a single tie between the 1250 and 1000 lithium on the charging methods – they both deploy solar, AC and the rather slow trickle charging reality of DC.

On all the other metrics, the Goal Zero Yeti 1250 lost completely to its lithium cousin, the 1000 lithium.

If you were hitherto confused about the two and somewhat uncertain, then, its time to make up your mind; between the two: the Yeti 1000 lithium wins clearly and without any arguments or even thoughts of a tie!